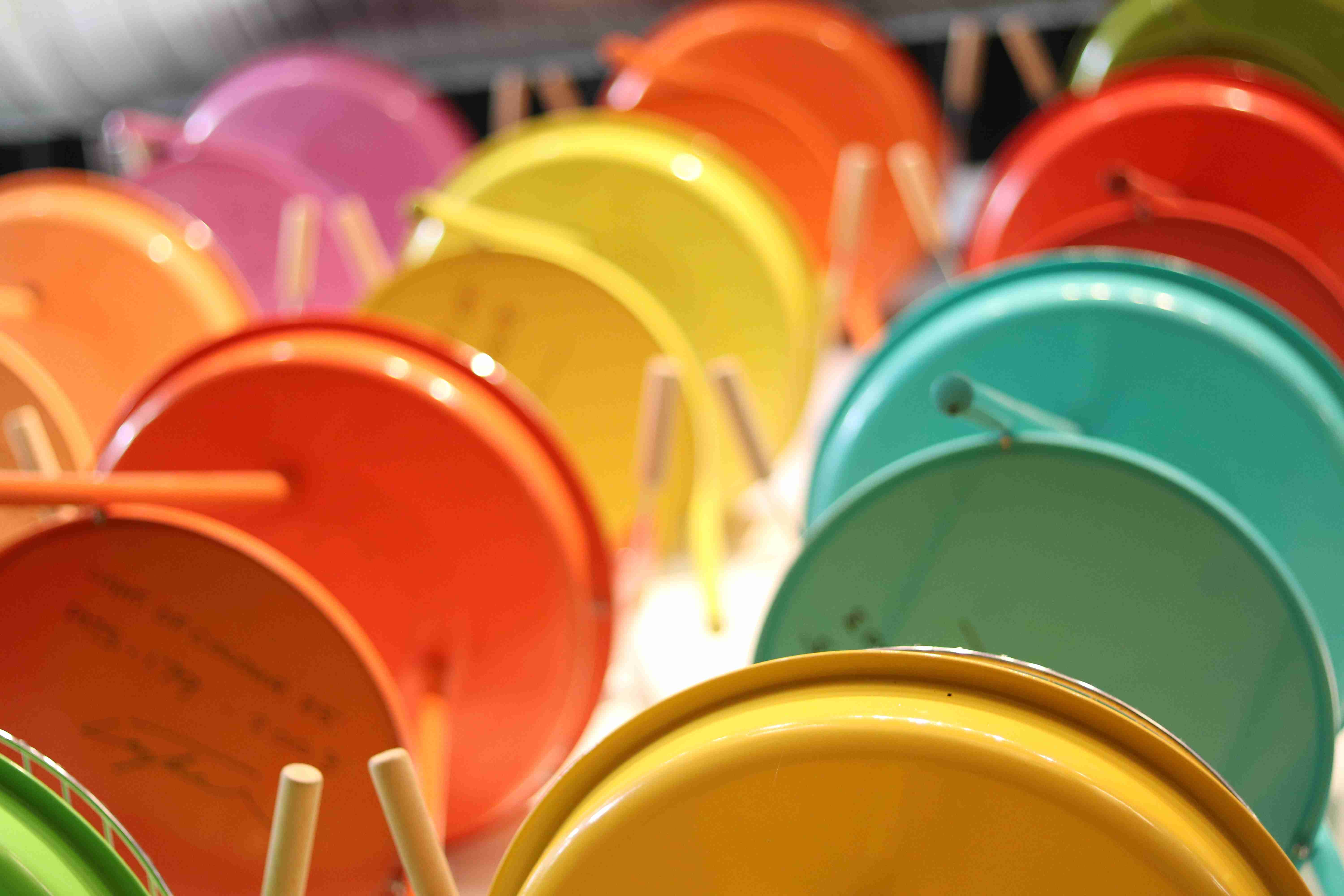 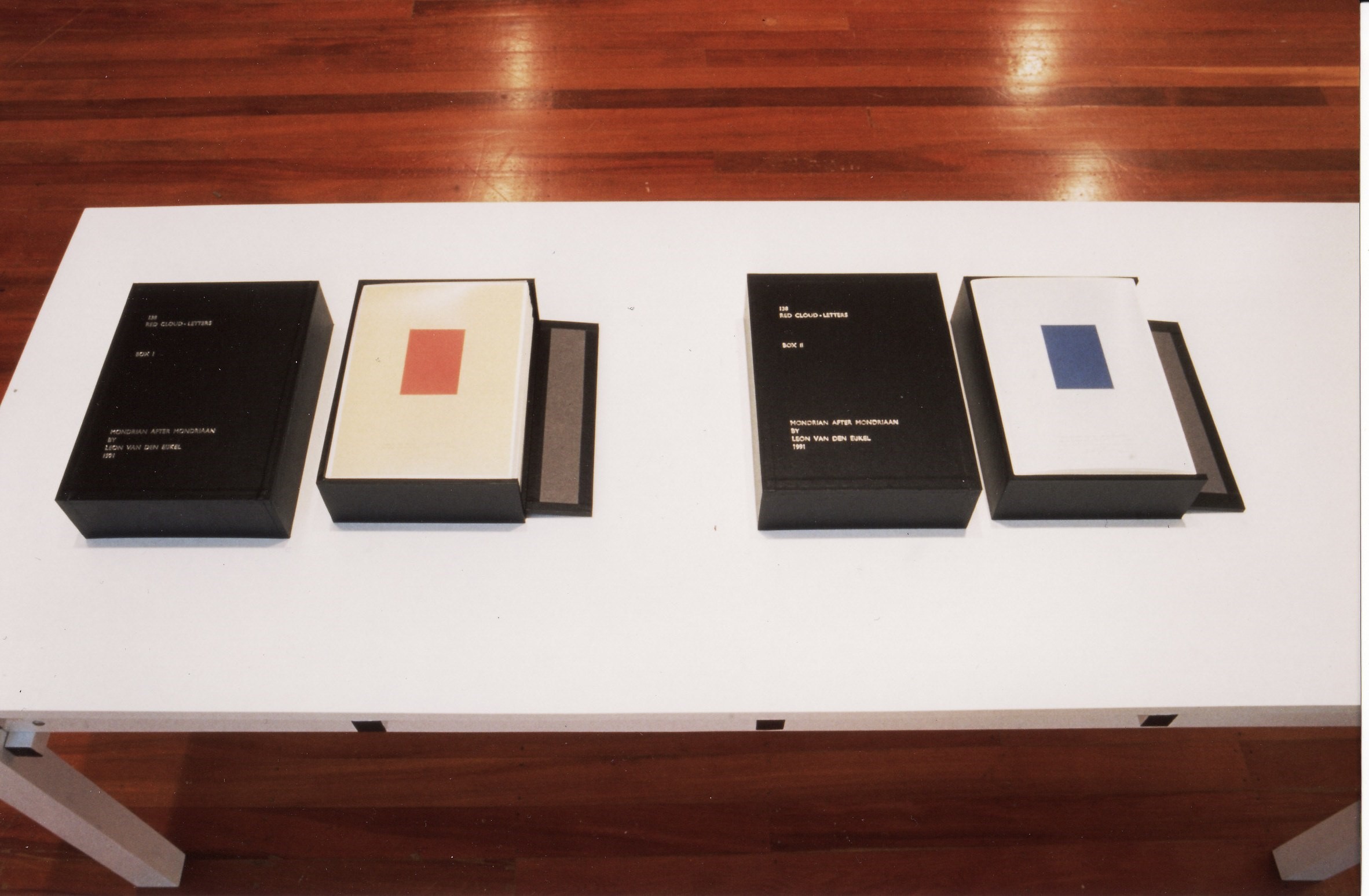 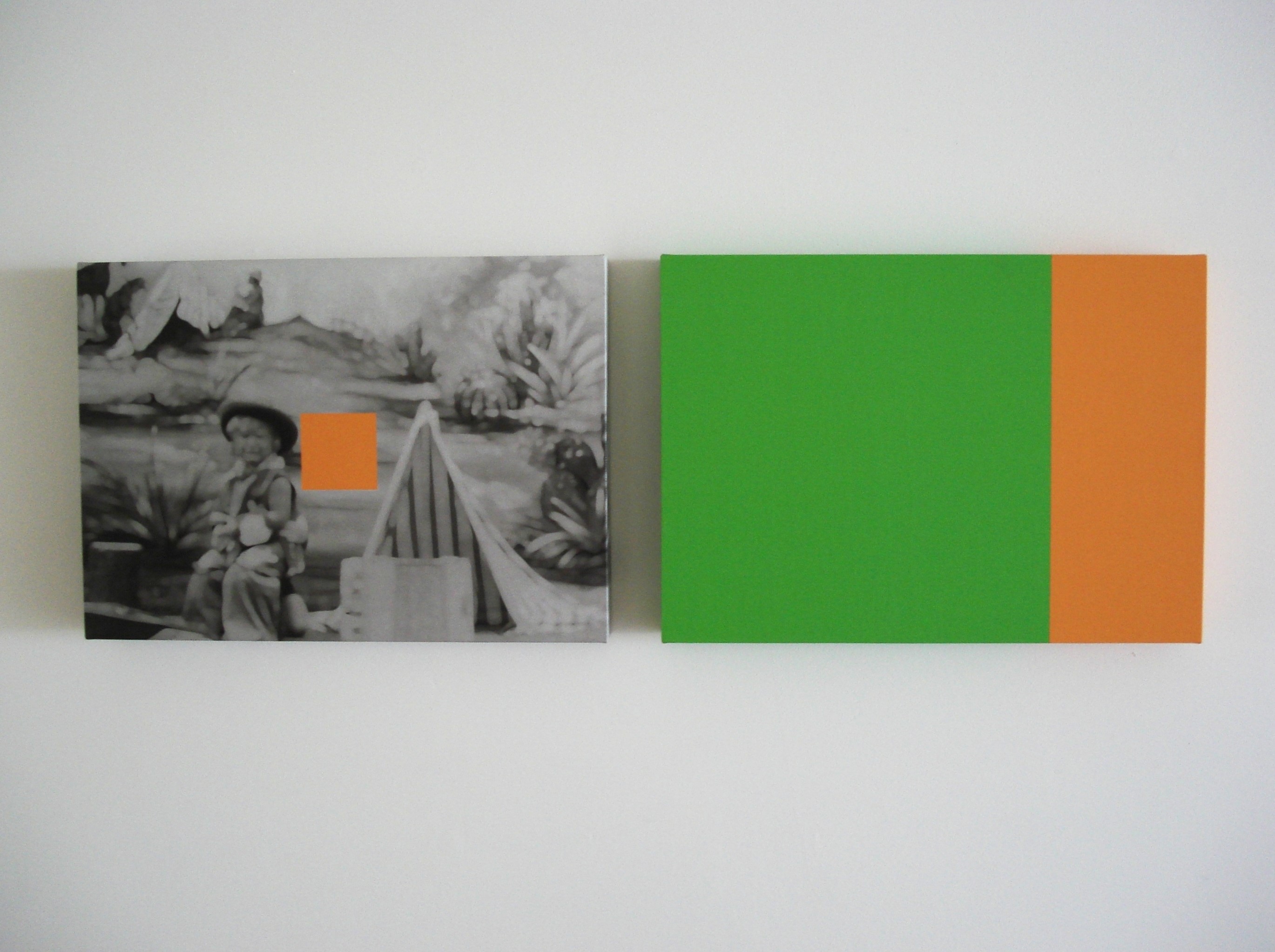 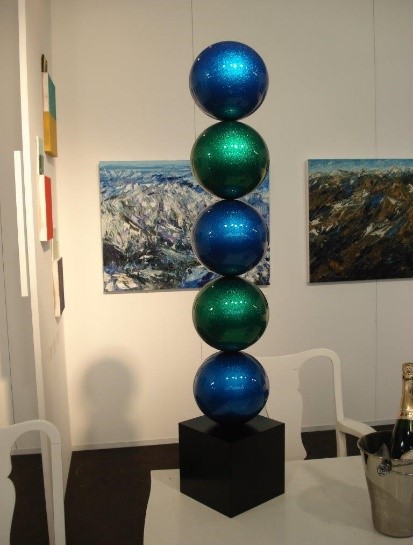 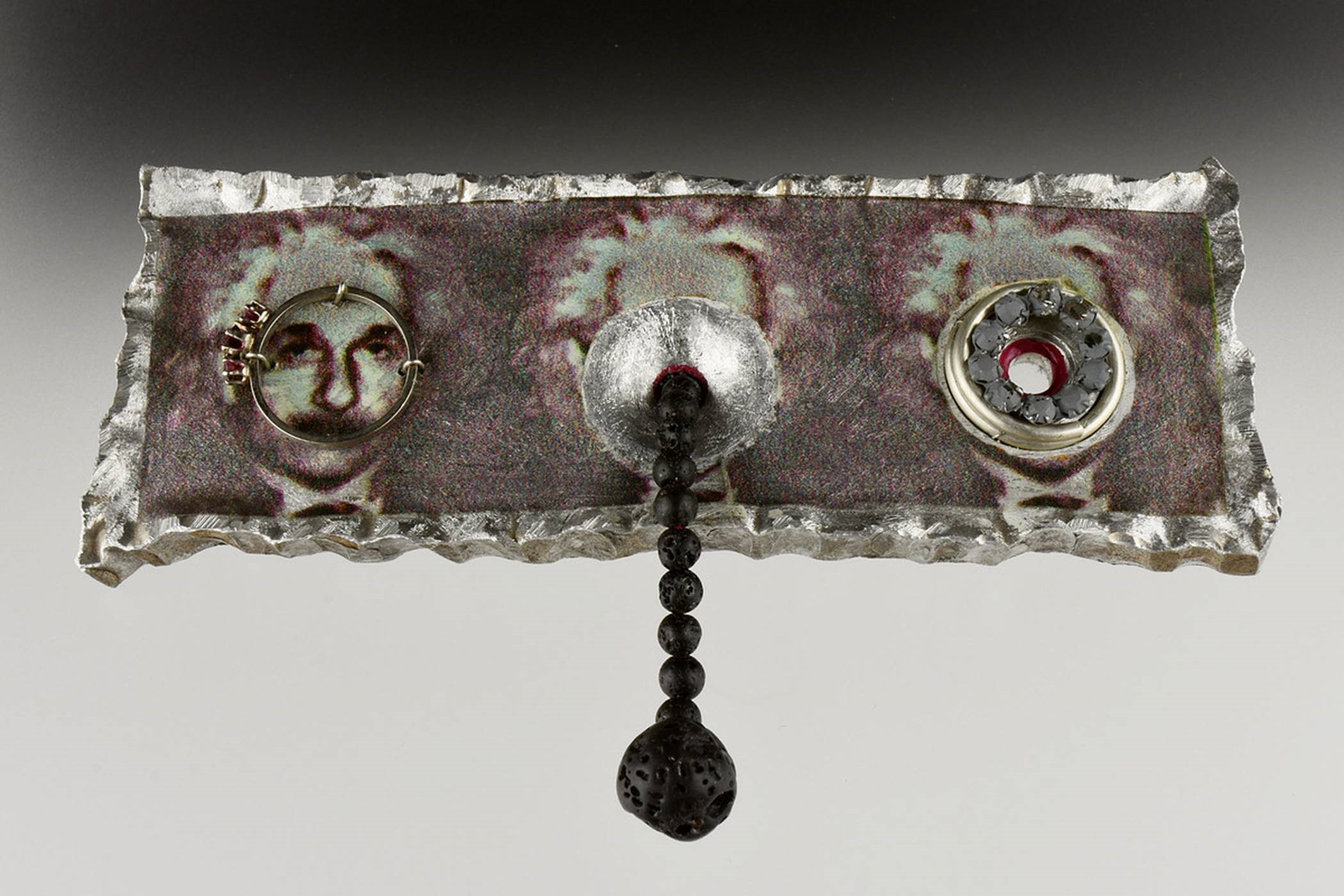 There’s jewellery, and then there is ‘art jewellery’. The differences between the two are vast. And that really showed, in the new exhibition ‘Parallax: Shine and Shadows – Spelen met Licht’ in the Mapuna Kabinet gallery in Te Awahou Nieuwe Stroom. 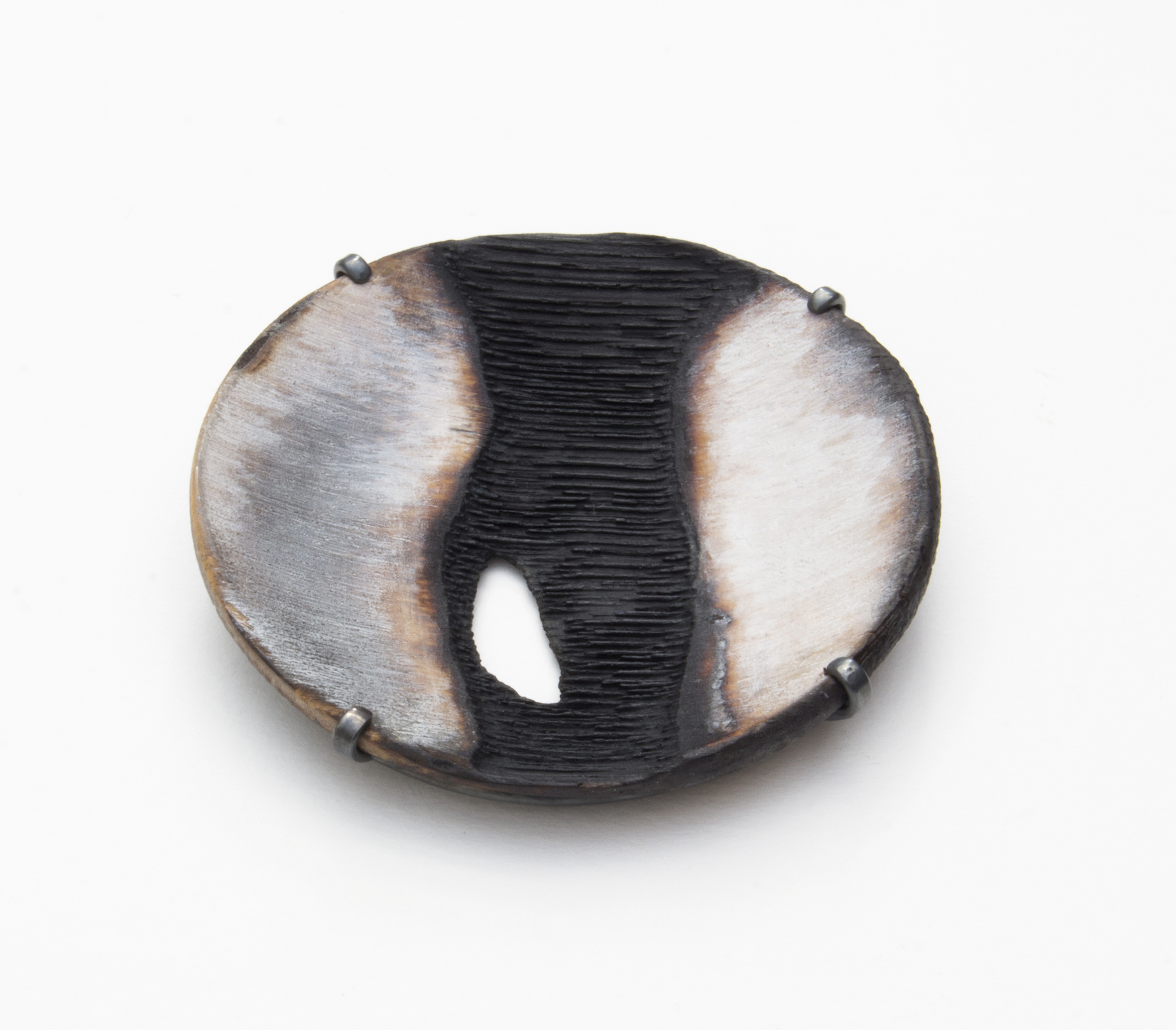 “Dutch artists since Rembrandt’s days have been fond of the concept of ‘spelen met licht’ – or playing with light,” says jeweller Peter Deckers. “We joined up as one painter and three jewellers, to do exactly that. By coming together in Parallax, we’ve created something unique.”

The art on display in the gallery, was all about illusion. The shine and glitter of jewellery played with your imagination. The artworks were surrounded by the shadows and colourful hues of moody paintings by Gerda Leenards, that worked on the emotions. 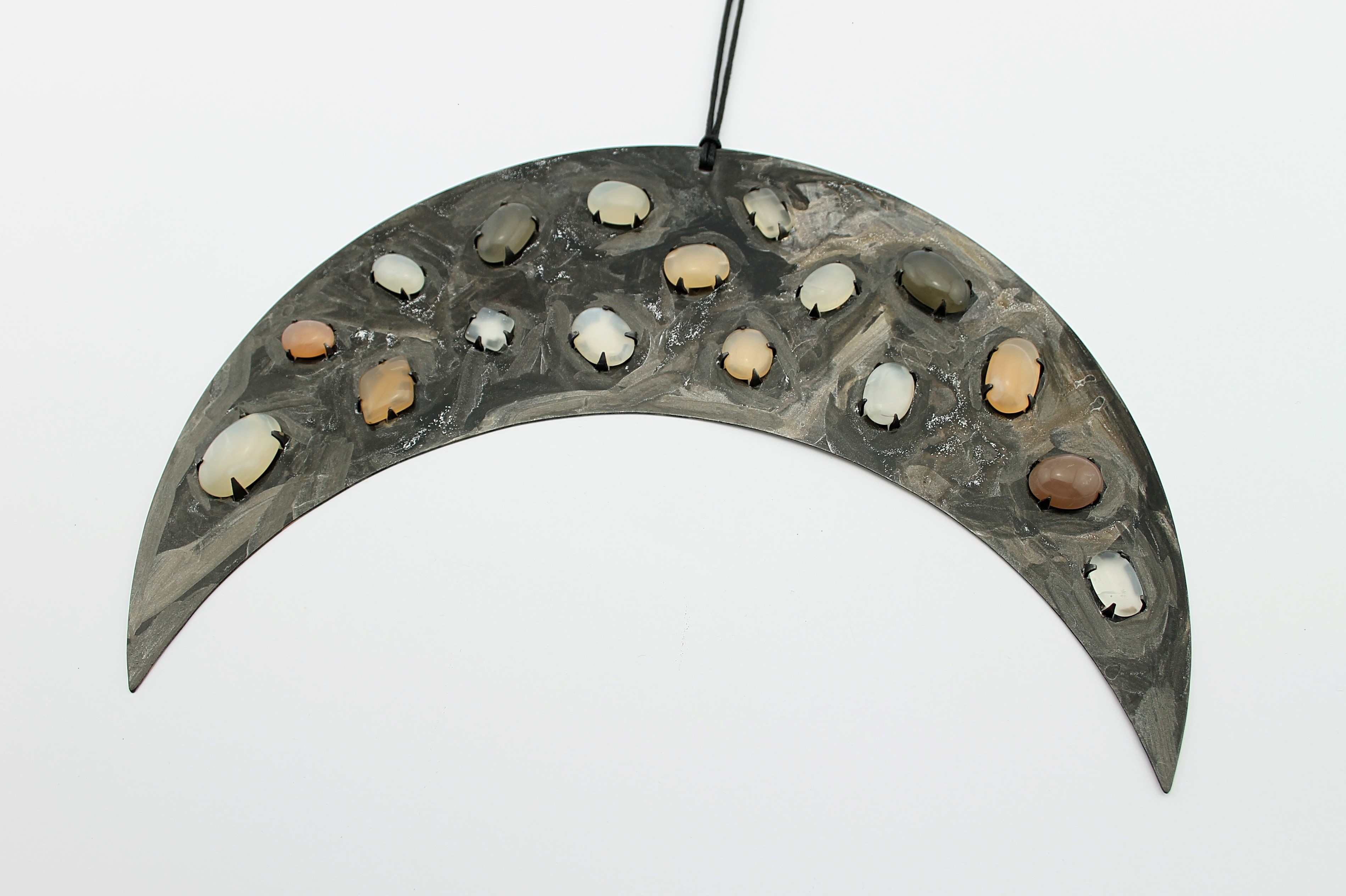 The artists who came together in the Parallax group exhibition, love to work with light, ideas, concepts, and interesting new angles to look at things.

“The vibes of our show are pure Aotearoa, but with deep Dutch roots,” says Peter. “Some might say, that it’s all about heritage and discipline – set free in an edgy land far from everywhere else, that’s full of boundless energy and freedom from stifling traditions.”

The Parallax group exhibition shows how the artistic heritage of two nations can influence each other. One draws on another – to create something new and exciting, with an identity of its own. “The concept of ‘Parallax’ is all about how the appearance of objects changes, if you change your position,” says Peter. “After all, the way you view your surroundings, alters what you actually see.”

“By bringing four different artists together, various perspectives of mood and transformation are presented, so we can hopefully come to see our everyday reality in a different perspective.”

Parallax distinguishes itself through the artists’ innovative ways in working with light and shadows. Each creates pieces with a clear Dutch heritage shining through in their art works.

Anne Frank exhibition:  ‘Let me be myself’

A challenge to prejudice and racism: 2019 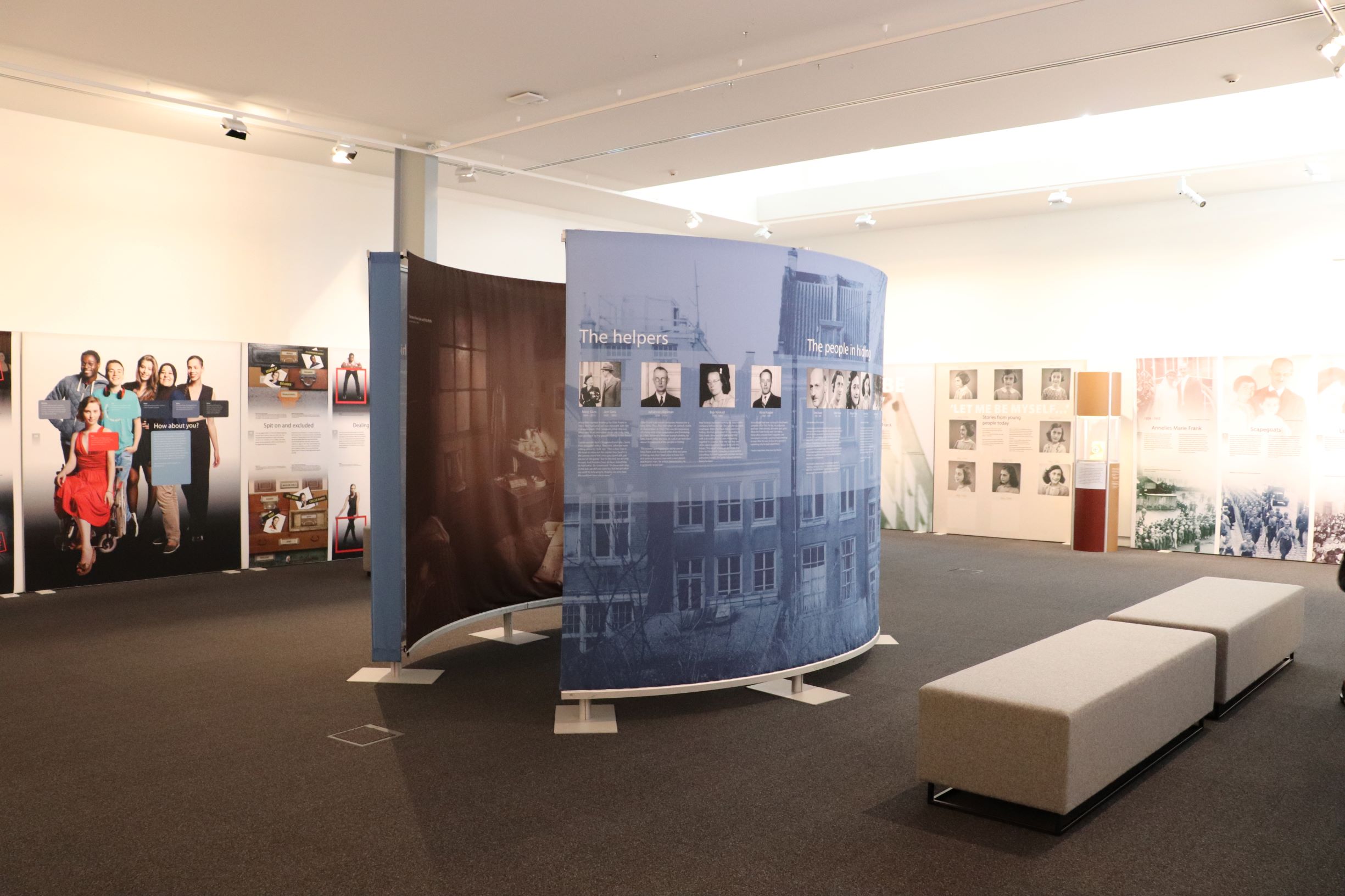 The internationally successful and ground-breaking Anne Frank exhibition – ‘Let Me Be Myself’ – opened in Foxton on 1 November, 2019.

The dynamic exhibition created by the Anne Frank House in Amsterdam had already visited 80 countries, and had been seen by more than 10 million people globally.

“This was a very important exhibition for us,” says Yolande van de Wetering, Co-Chair of the Oranjehof Dutch Connection Museum Trust. “I grew up in an era, when the story of Anne Frank and her diary was still very much front of mind.” 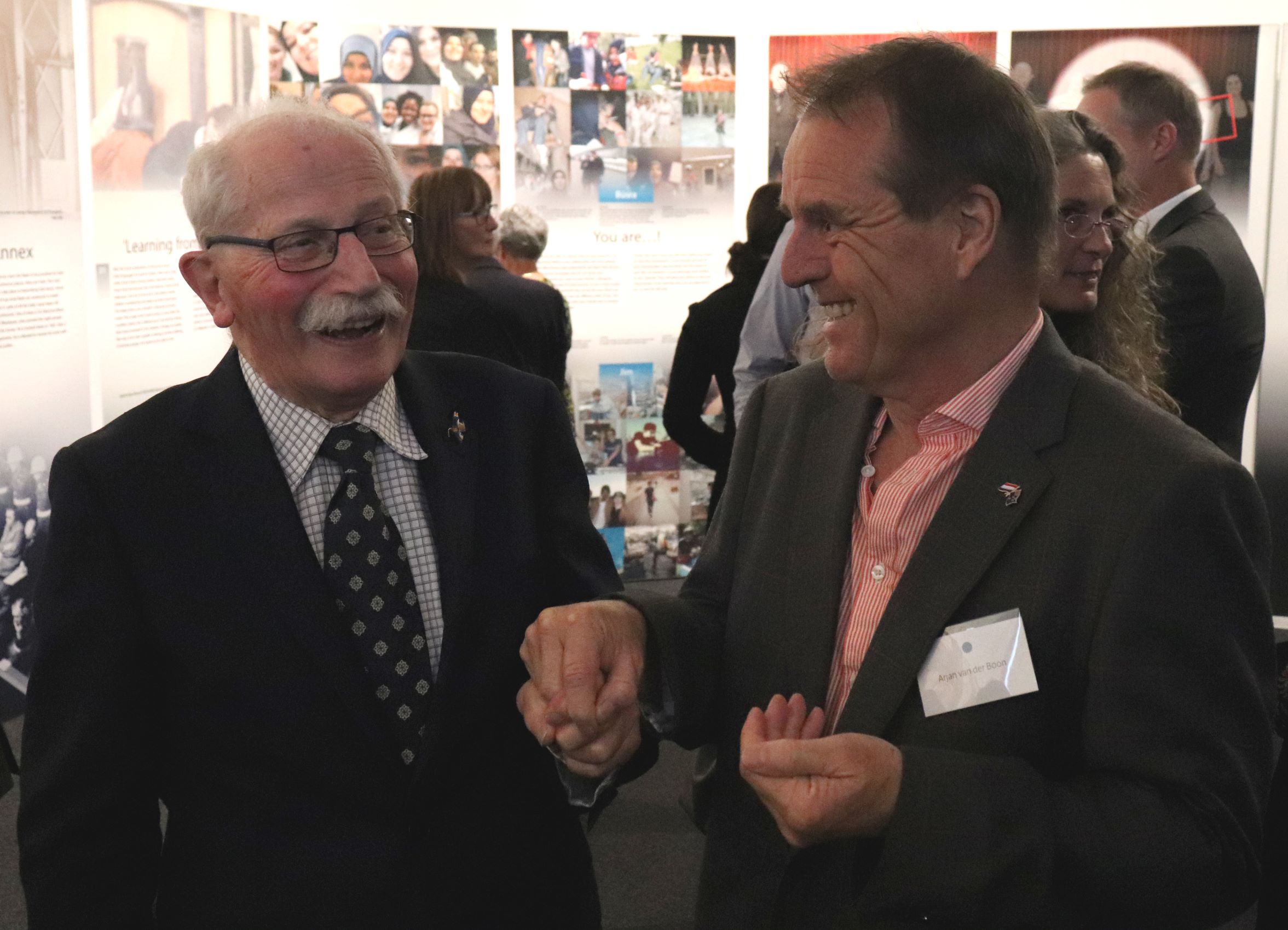 “The horrors of World War II and the 5-year German occupation were fresh in everybody’s memories in the Netherlands. Families would talk about their personal experiences, as many had been traumatised.

"In total some 250,000 Dutch people died – or one in every 40 people. And that included more than 100,000 Jews who were deported, and never returned from the death camps. Educating the younger generations about the ultimate consequences of racism is still very relevant today,” says Yolande. 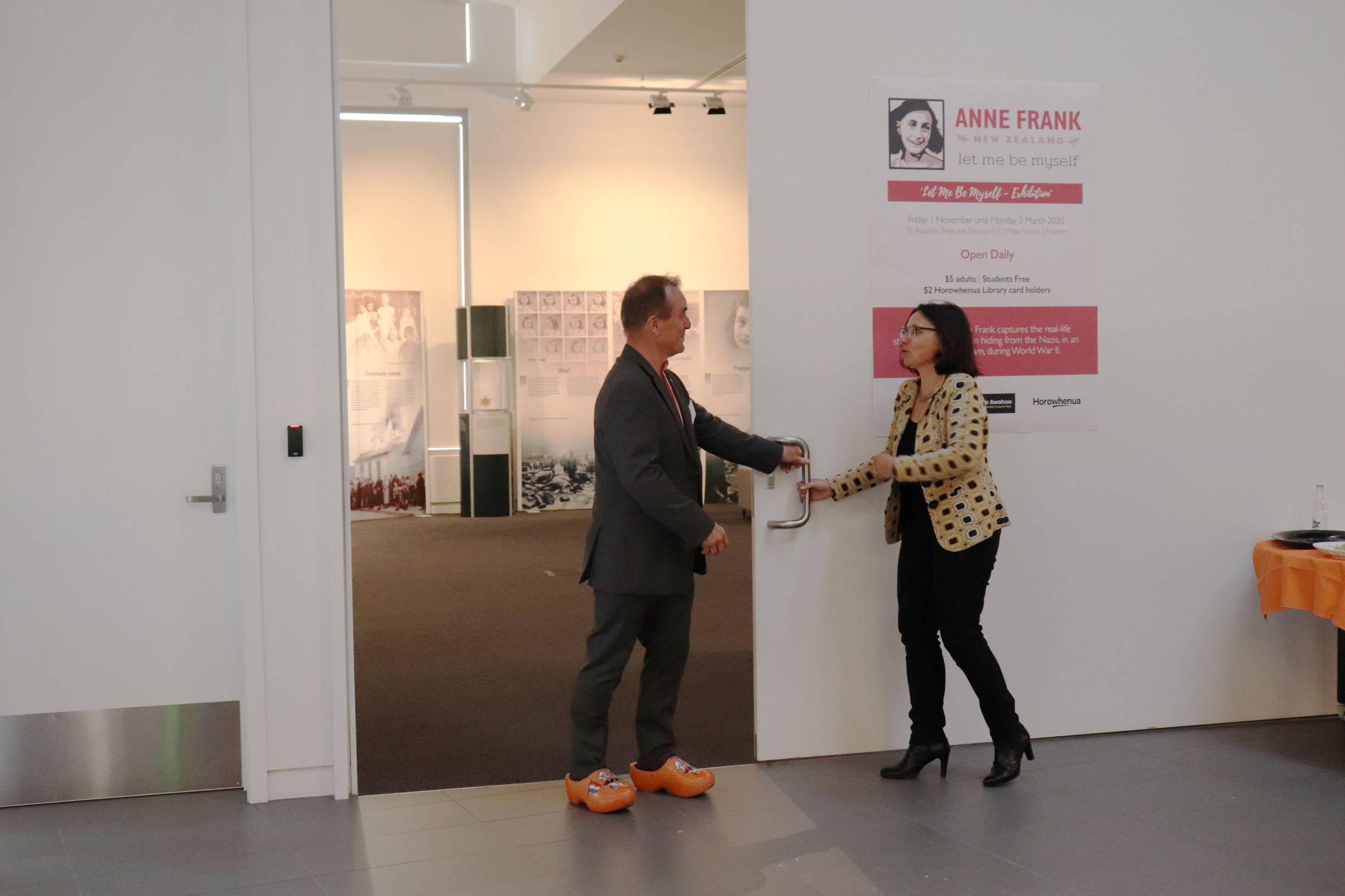 The Diary of Anne Frank captures the real-life story of a young girl, in hiding with her family from the Nazis, in an attic in Amsterdam. 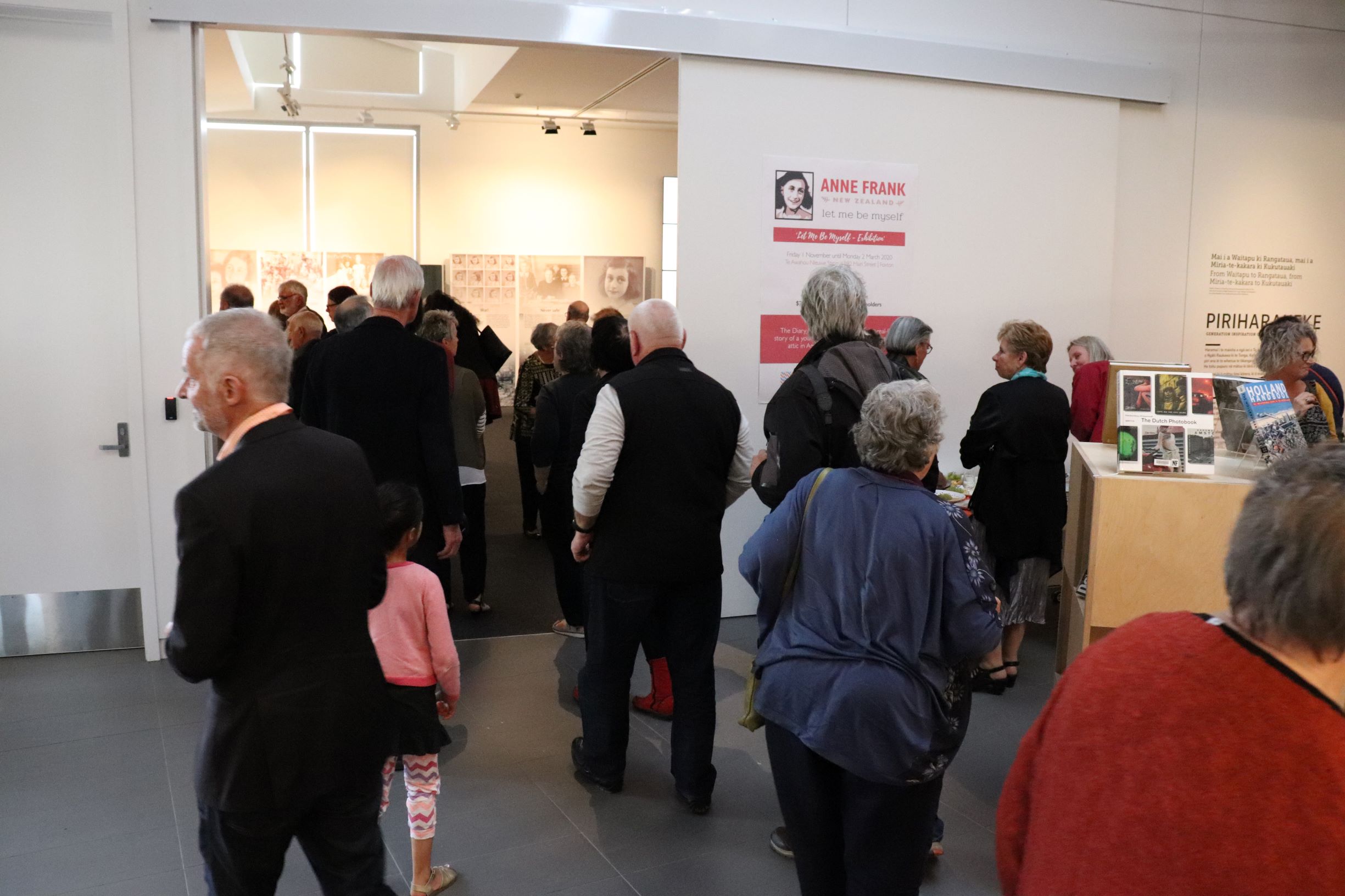 Using a combination of excerpts from Anne Frank’s famous diary, historical artefacts, pictures, video and testimony, the exhibition showed the life of the Frank family and the history of the era - engaging visitors in a discussion about how the same themes affect our modern world.

Drawing on the experiences of teenagers today, the exhibition also talked about disability, prejudice, homophobia and racism in the 21st century. It challenges the visitor to examine their own core, moral values.

Additional material – including a testimony from a Māori boy and a British immigrant girl – brought the New Zealand experience into sharp focus.

Paintings from one of the world’s greatest artists: 2018

Rembrandt Remastered - with digitally remastered, life-size paintings - was on show  from February to April, 2018. 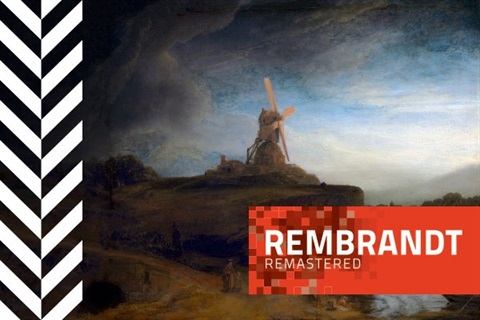 As part of a touring international exhibition, the paintings were digitally reproduced after years of scholarly research and photography of over 300 of Rembrandt’s works. They looked as they would have, when they left Rembrandt’s studio some 400 years ago.

Gallery visitors had a rare opportunity to see high-quality, digitally remastered works from the great Dutch artist - right next door to Oranjehof, the home of Dutch heritage in New Zealand.

In 1642, Abel Tasman and 110 men set sail to on a journey of some 30,000 kilometers on two small wooden boats. No GPS. No weather forecasts. No communications. The roughest southern seas. 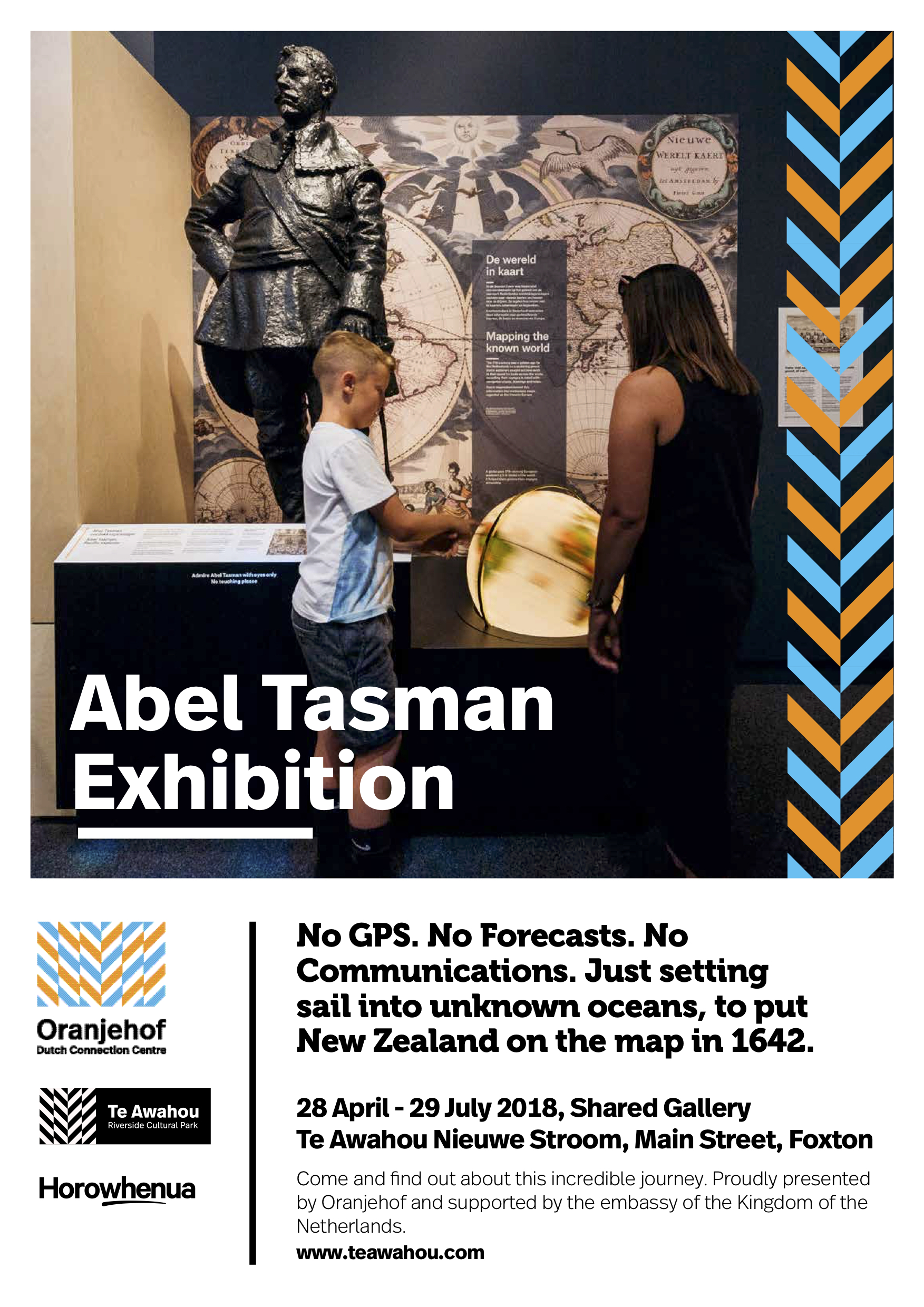 The Tasman Exhibition 'Welcome Aboard' was created in the Netherlands, Tasmania and Aotearoa, to tell that epic story - through the eyes of sailors on board of De Heemskerck and De Zeehaen. The encounter with the people of Ngāti Tumatakokiri in Mohua / Golden Bay and the Dutch was an important part of the story told in the exhibition. (Still available on loan.)

In a seminar hosted at the opening of the Exhibition, several experts focused on differents part of the Tasman story. Dave Horry presented insights about the sequence of events in Golden Bay, where he lives. Rudiger Mack showed a range of the evidence on Tasman from the international archives.

Patricia Wallace brought the Maori perspective, looking at the clothing Tumatakokiri were wearing back then. She showed how images of Māori in Abel Tasman's journal led to the recovery of a particular garment still worn by tangata whenua when James Cook reached New Zealand in 1769.