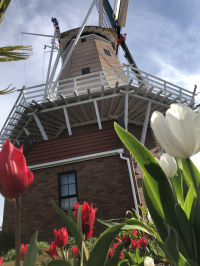 The Dutch community will celebrate ‘all things Dutch’ – all over the country in 2021 – during the first ever ‘Dutch Week’, from Saturday 24 April to Sunday 2 May.

The aim of a week of activities, is to highlight and celebrate the culture, language, arts, food and heritage of the Dutch immigrant diaspora – now an integral part of the diverse fabric of Aotearoa New Zealand.

Dutch Week will be officially launched by the Hon. Priyanca Radhakrishnan, Minister for Diversity, Inclusion and Ethnic Communities, together with Ambassador Mira Woldberg on Saturday 24 April, in Foxton - next to De Molen.

“Foxton is the right place to kick off all the festivities,” says Arjan van der Boon, Co-Chair of the Oranjehof Dutch Connection Centre. “It will be a part of our annual Big Dutch Day Out.”

“We have the Oranjehof museum here, that tells the story of the Dutch immigrants in New Zealand – right next to a 30m high icon of Dutchness, the flour-grinding windmill De Molen. There will be modern art on display, an 1880 Amsterdam street organ pumping its tunes, and lots of traditional games – plus an ice skating rink. With all that cheerful fun… Things don’t get much more Dutch than that,” says Arjan.

An orange show of solidarity with Covid-stricken Netherlands

To show support for everybody back home in the Covid-stricken Netherlands, the Dutch Embassy is signing up major landmarks across Christchurch, Wellington and Auckland to have them lit up orange at night during the Dutch week.

A raft of activities

“As Dutch immigrants we have not always been very visible in New Zealand,” says Dr Joost de Bruin, President of Dutch Communities NZ. “Dutch people love to share their culture and the aim of Dutch Week is to create an interactive and joint celebration of heritage, art, food, language and community with everybody else in Aotearoa New Zealand.”

During the week, the NetherlaNZ Foundation is organising a Dutch Film Festival in the three major cities. A nationwide Dutch speech competition is organized for youth. And a Distant Kinship / Verre Verwanten exhibition in Hamilton will show prints by local print making artists from the Netherlands and New Zealand.

Dutch clubs in Auckland, Wellington, Christchurch and a range of smaller towns will celebrate Koningsdag, along with anyone else who enjoys typically Dutch foods and drinks like kroketten, oliebollen (a type of donut), speculaas, lots of koffie, and perhaps Dutch beer or a small tulip glass of jenever.

There also will be vrijmarkten where kids can sell their spare toys from a blanket and score heaps of cheap ‘new’ ones.

2021- First Ever ‘Dutch Week’
+ Text Size -
Do NOT follow this link or you will be banned from the server!